The way we deal with food has a major impact on the space that surrounds us. In recent years, the picturesque countryside and the urban market have lost their meaning. They have been out-scaled by a new industrial landscape of black boxes. What happens in these boxes?

We buy our food in restaurants and at farmers’ markets – lovely during the weekends. On weekdays we simply get it from the supermarket or have it delivered. Usually we know where our produce comes from: wheat grows in fields, fruit comes from the Betuwe region, cows produce milk – from which we produce yoghurt and cheese. And thanks to the greenhouses in the Westland region we have tomatoes and cucumbers available year-round. Annually 160,000 workers in the Netherlands produce a whopping €10 billion worth of foodstuff.1

98% of our food is processed

Still, this is only a fraction of the food system in the Netherlands. Between production and consumption lies a vast industrial system of manufacturing, processing, distribution, marketing and other services. We know very little about this system, and rarely encounter it. Large parts of what happens with our food is hidden from view, taking place in a ‘black-box landscape’: logistics warehouses, aluminium-clad production sites, and anonymous office premises surrounded by fences. Most of the economic value added in the food chain is created at these locations. Innovation and labor takes place here. The discrete nature of this part of the food system does raise questions. In fact, it only ever appears in the news if things go wrong. The romantic marketing of grazing cows on milk cartons, or the friendly farmer on packs of vine tomatoes, is hard to recognise. This is a place where the cold logic of logistics and economics reigns. Or so it seems.

This research delve deeper into the black-box landscape. No less than 98% of all our food is processed in some way before it enters our kitchen.2 Products are cleaned, sorted and packaged. New products are created: milk is transformed into cheese, grain into bread, and fruit into jam, juice, soft drinks, etc. Tomatoes and cucumbers are mixed with other ingredients and turned into convenient, ready-made salads. Our food meets all food and safety standards, and all the requirements imposed by retailers and consumers. This processing industry earns much more money than the primary production – some €20 billion – twice as much as cattle breeders, farmers, gardeners and fishermen combined.

Food produced in the Netherlands is by no means exclusively destined for the Dutch market. Industrial food chain often includes multiple continents. The figures show this too: 80 percent of revenues and 75 percent of employment in the processing industry can be attributed to imported products.3 Large proportion of the global flow of soy, cocoa and coffee passes through our country. Out of 949 million kg of cacao imported a merer 3 million kg is consumed here.4 A large proportion of imported goods is simply checked for quality and transloaded or cross docked into different packaging and transport mode. A cynic might say that it’s just about shifting boxes, but this distribution represents a worth of €4 billion and 50,000 jobs.

This system of importing, intensive domestic production, high-value processing, handling and transshipment has been almost perfected in the Netherlands. Our position as a gateway to Europe makes our country pivotal in the global food system, meaning safe food is abundantly available here in all seasons. Transit makes us a large exporter of food, second only after the United States. Unilever, Heineken and FrieslandCampina, the three largest food companies in the Netherlands, serve the entire world from our domestic market. They rely on rail, road and water transport for supply and delivery. Speed is of the essence, so these industries are located along infrastructural networks.

In ancient times the countryside used to be right behind the city wall. Townspeople encountered producers at the market. This connection has since been obfuscated. Thomas Sieverts writes about the ‘Zwischenstadt’5, a landscape that’s neither city nor rural area. This ‘in-between city’ accomodates mass recreation, big-box stores for furniture and DIY, sports clubs and gyms. It’s also an occupational landscape of offices and businesses. Cheap land allows for lots of square metres. Spatial development is no longer determined by environmental factors. Instead, size and speed of a fully loaded truck determine road width and radius. Logistics determine the internal dimensions of buildings: a corridor wide enough for a forklift truck, with stacks on both sides, is ideal. And the more loading docks on one side of a building the better. A box is easy to build, and results in an optimized ratio of volume per area outer surface, which saves costs and improves energy efficiency.

Many companies try to reduce the amount of tangible assets on their balance sheet. Especially real estate is seen as ‘dead capital’, which should be activated and used for direct operations. The past few years many companies have sold their premises to investors using sale-and-lease-back contracts. New buildings will be erected, at risk, by developers without knowing an end user. Any deviations from the norm make it harder to find a tenant and second user, which means all new buildings are becoming increasingly similar. The logic of logistics and finance results in far-reaching uniformity in this black-box landscape; the fruit world of Barendrecht looks exactly like the fish world in Urk.

The granary used to be the most important building in the city. Whoever owned it held sway over the population. Nowadays, large stocks no longer seem to exist. Like the car industry, food logistic is managed ‘just-in-time’: a product will be ready for us exactly when we want it. Food is always on the way, made possible by cheap mobility. An apple harvested in New Zealand and shipped to Europe has a smaller energy footprint than a Dutch Elstar apple that’s been sitting in a refrigerated warehouse for ten months. We barely know food shortage. Exceptionally, things go wrong, for example when snow in Southern Europe causes a spinach harvest to fail. But luckily there’s always frozen vegetables to fall back on, because warehouses do exist. They tower high above the ports of Rotterdam, Vlissingen and IJmuiden.

Motorways offer a good view of the full scope of our food landscape: the fields and meadows, and the colossal buildings in the black-box landscape on the outskirts of our cities and at large traffic junctions. A truck driver next to you could be carying a full load of strawberries. The image an the truck’s side has been created by a graphic designer. They too are part of the Dutch agrifood complex. Just like all the suppliers of machines and packaging, and advisers, banks and insurers. Altogether, this amounts to around 600,000 jobs and a combined turnover of €48 billion, some 8% of the total economy.

We all know the familiar Laughing Cow on the packaging. We buy our tomatoes from the friendly local grower at the farmers’ market. In supermarkets these days, meat is no longer on refrigerated shelves but rather at the artisan butcher’s stall. Conscious consumers are looking for products with sentiment and authenticity, a good story about its origin.

But on the news we see different stories. Food scandals follow each other in quick succession. Farmers have supersized, with even more cows since the milk quotas have been repealed. Ingredients are dragged from across the world. Production and consumption of our foods seem to be miles and miles apart. When we bike through rural areas, all we see is well-grazed pastures. Production seems to be large-scale, cheap and emotionless. Smart marketers try to reduce this emotional distance, which is why we see farmer, brewer, fisherman and other age-old professions in advertising. The idea that we are personally getting to know the makers of our food increases the trust we have in food safety.

The processing in black boxes, however, receives hardly any attention at all, despite its immense contribution to the food system. The associated black-box landscape remains virtually unknown and anonymous to most since these aren’t inviting places to visit. But many hundreds of thousands of people do spend their working lives here. They take great care in the work and speak proudly about it. Their stories can provide answers to some very relevant questions we have about our food*.

What happens if we make these areas a perceptible part of our food landscape? This would tell a story that’s very different to the artisan romance that currently prevails. An acquired taste, perhaps? But it will be an honest story that makes us understand how the environment influences our food, and how our relationship with food affects the environment we live in. 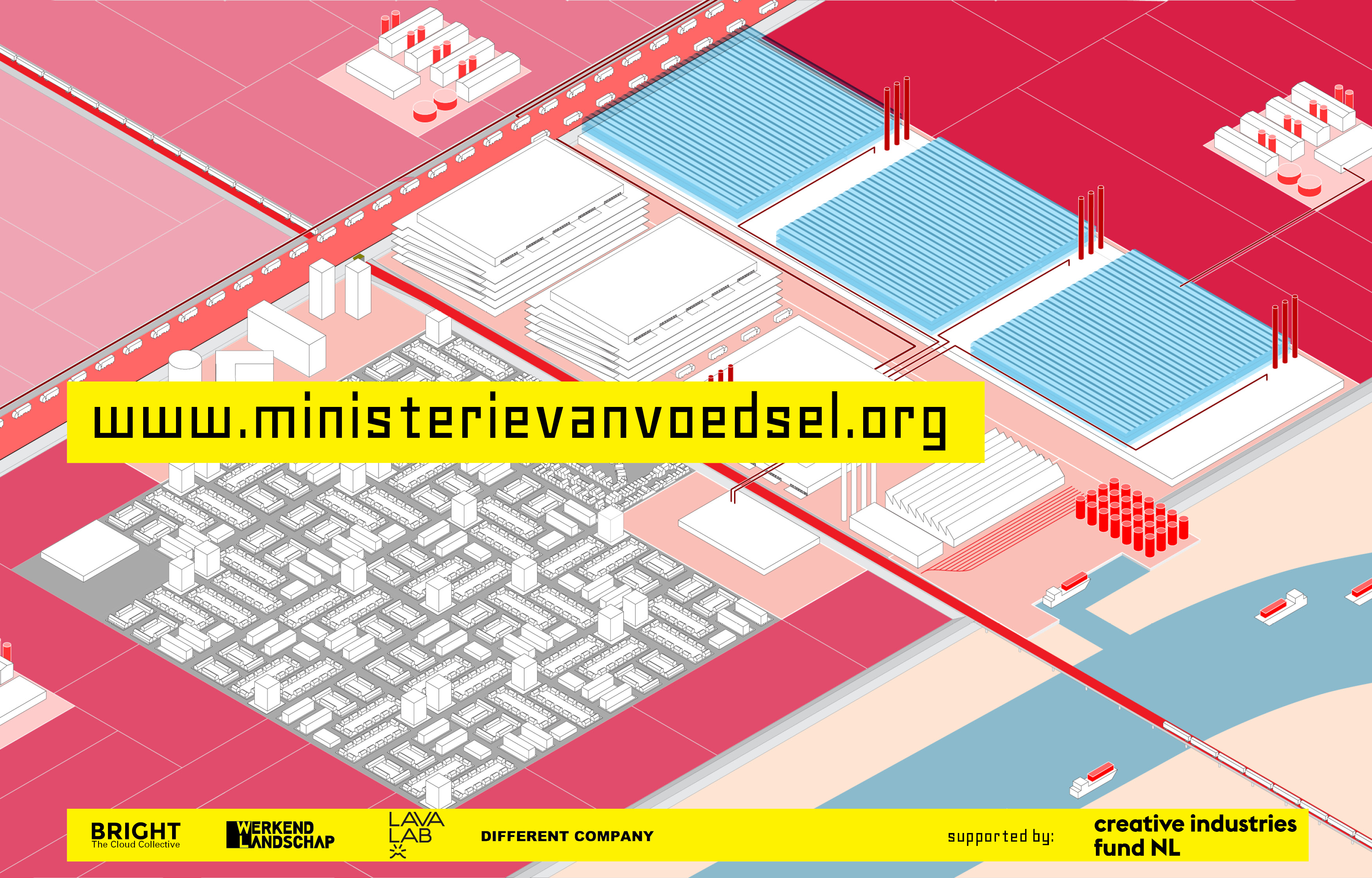